Office of the President

The Office of the President manages all the efforts of the University in carrying out its mission, identity and ministry. 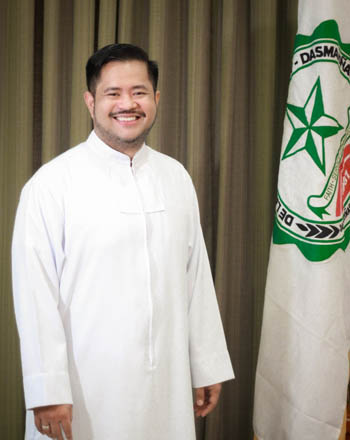 Br. Francisco de la Rosa VI FSC, known as Br. Sockie studied at at La Salle Greenhills for his primary and secondary education. He received his degree in Education from De La Salle University, Manila in 2005 through an Academic scholarship.

He continued his post-graduate studies at the University of Hong Kong and earned his degree in Master of Education, Educational Administration and Management (with Distinction).

Br. Sockie joined the De La Salle Brothers right after graduation from university. After a year of teacher training at La Salle Green Hills, he was sent to Bacolod where he spent three years teaching Philippine History and Religion at St. Joseph School-La Salle. His next assignment was in Dasmariñas where he taught at the Psychology Department of De La Salle University-Dasmariñas and the College of Humanities and Sciences of De La Salle Health Sciences Institute.

He also took on the post of Chair of the Religious Education and Philosophy Unit at DLSHSI.

After three years in Dasmariñas, he was transferred to Hong Kong to serve as Administrator of the Lasallian East Asia District (LEAD) Provincialate, the administrative and communications center for the La Salle Brothers in Asia.

He also taught religion at La Salle College, Kowloon. He spent four years working for LEAD (2016- 2020). After his stint in Hong Kong, he was assigned to the University of St La Salle in 2020 as the concurrent Principal of the Integrated School and the Liceo De La Salle Senior High school. He continued to serve the Brothers as their local superior (community director) and in Asia as the Director for Professional Development.

After two years in Bacolod, he was asked to return to Cavite in 2021 to serve as the first Chancellor of De La Salle University-Dasmariñas. After one year as Chancellor, he was appointed as the 9th President of DLSU-D in 2022 and Director of the Residencia Brothers Community (Local Religious Superior).

Offices under the Office of the President