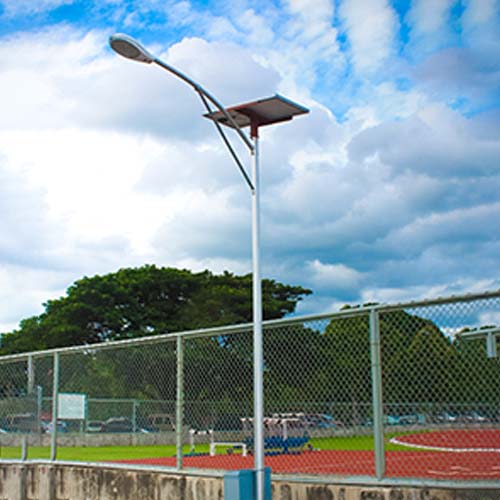 DLSU-D prides itself in its commitment to adopting clean sources of energy for its operations and advocating for climate change solutions.

BLACK OUT! GREEN IN!

This program is part of De la Salle Philippines' initiative to become a carbon-neutral university. It does not simply present innovative ways to offer the university's carbon footprint and mitigate carbon emissions; it also educates and challenges the DLSU-D community o to become involved in the fight against human-induced climate change.

DLSU-D is powered by 60 percent geothermal energy, a clean source of power.

The 300-meter stretch is now illuminated by LED lights powered by energy stored from sunlight. The move saves the University 2,000 KW of electricity per year and reduces its carbon footprint by 1,800 tons of greenhouse gases.

From previous flourescent lighting, the campus is shifting to the use of LED lamps as well as inverter type appliances to minimize carbon footprint.These measures resulted in reduced Kwh consumption. From 2017-2018, these measures have reduced the University's energy consumption by 59.19 percent.

Based on studies, the temperature within the DLSU-D campus is 2 degrees cooler than its external environment. This can be atrributed to the rich biodoversity in campus.

A study conducted by Lasallian faculty members indicated that online classes that DLSU-D has made as a part of the curriculum hhas reduced the student’s carbon footprint by 71.44 % translating to 45.77 kg per class session compared to conventional face to face method of delivery.

AlterNative Ideas and Mechanisms On Zero-waste or ANIMO Zero-waste! is a five-year program of the DLSU-D High School in partnership with the Environmental Resources Management Center on solid waste management that is targeted towards policy, systems, education, research, and extension.

De La Salle University-Dasmarinas was one of the first universities to sign the declaration of the First Symposium for Schools to Adopt the Zero Waste Lifestyle (ATZWL).

The General Services Office instituted a policy allowing only two persons per student or family to avail of car stickers, limiting the entry of vehicles inside the campus.

The University has actively partnered with the government and De La Salle Philippines in its tree-planting activities. Right now, DLSU-D has three major adopted planting sites namely: Lian, Batangas (mangrove), Mt. Palay-Palay (land-based plants), and Noveleta, Cavite (mangrove). More tree planting sites will be adopted by DLSU-D next school especially in Cavite where the lowland areas will be much affected by climate change.

Establishment of Seedling Bank for Native and Indigenous Trees

ERMAC established the DLSU-D Seedling Bank and Nursery of Philippine Native Trees to promote the proliferation of Philippine hardwood and fruit-bearing trees, and become a source of seedlings for the University's tree planting activities to reduce DLSU-D's carbon footprint.